In most people’s minds the concept of the ‘African Safari’ probably evokes the idea of game viewing by vehicle, and indeed this is likely to remain the most popular activity undertaken here.

After all, can there be anything to compete with the thrill of getting up close to really big game, such as buffalo, hippo, leopards, lions and elephant – all from the safety of your vehicle?

Well, yes – and it’s the thrill of taking to your feet in the bush, in exactly the same kind of habitat, but without the feeling of protection afforded by a vehicle. Here you will be down at the same level as the wildlife, sharing its environment, not spectating at it, and experiencing the scents and sounds of wild Africa. There is little to beat the way that the adrenaline courses through your body as you experience tracking big game on foot.

Perhaps the most significant way of describing a walking safari, in contrast to conventional game viewing, is that, while the latter is a holiday, the former is an adventure! Undoubtedly you will remember the walking part of your experience in Africa long after the memories of game sightings have faded away. Essentially you will feel that you have been an integral part of the life of the bush, not just observing it.

Ideally your walking safari will take place from a traditional bush camp, rather than an upmarket lodge, and your day will typically begin at dawn as you are woken by a member of the camp staff filling your bucket shower (less fun than it may sound; but proper flushing loos are usually provided). After a brief breakfast you will take to your feet before the day begins to heat up.

Depending on the time of year, you may walk for 3-5 hours, returning to camp only when it really gets too hot to walk. Later in the day, as it gets cooler, you may take a further, shorter, walk, before relaxing with a welcome sundowner. You don’t have to walk all the time, however: you may prefer to substitute a game viewing drive instead. It’s up to you entirely.

Carrying only cameras, binoculars and water bottles, you will set off strictly in single file, although frequently regrouping to study the various plants, insects and animal signs that you will encounter along the way. The first half an hour or so is often described as ‘reading your daily newspaper’, as you study the ground in front of you, to deduce what wildlife has passed by overnight. Indeed there is a story to be told in virtually every track and dropping that you will come across.

Conventionally the lead position will be occupied by a minimum of one armed professional guide   (who will be carrying a heavy calibre rifle). There may also be a second, local, guide. In fact the guide’s responsibility is as much to look after your own safety, as that of the wildlife that you may encounter. You certainly won’t find him blasting off shots at every opportunity: indeed we ourselves have never known a weapon to be used, even in the hairiest of situations. Your guide will have an encyclopaedic knowledge of where you will be walking (in most cases he was brought up here), and will delight in explaining how so many plants and trees can be used for native medicines (including of course a bush version of Viagra!), and in teaching you how to identify droppings, distinguish lion from leopard tracks, and so on. He may even show off his skills by creating a camp fire using just a couple of pieces of (carefully chosen) wood, for your mid-walk tea break (see below).

The term ‘walking safari’ can actually reflect a wide range of activities: 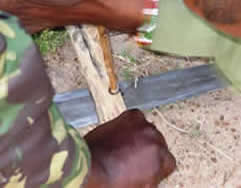 A Bimble in the Bush: In those locations where walking is permitted, most camps will offer the opportunity for a one to two hour walk in the vicinity of the camp. If you’ve never taken to your feet in the bush previously then this can be quite instructive, providing as it does the opportunity to look at things – tracks, droppings, insects, bushes and trees – that rarely get seen whilst blasting through the bush in a vehicle. However it is rarely an energetic activity, of the kind that the true walker relishes, and in truth may actually never stray very far from the vicinity of the camp, and may not include many actual game sightings.

Half Day Walks: More serious excursions may be undertaken in other locations, although – dependent of course on the season - it is usually too hot to walk in between about 11.00 a.m. and 4.00 p.m., and hence the restriction to around half a day. As on all walks, you will be accompanied by an armed guide, although his range of experience may be limited.

Mobile Walking Safaris: This is getting much closer to the original concept of the (modern tourist) walking safari, trying to recreate the journeys undertaken by those early, Edwardian, explorers, on which much of the current ‘safari’ concept is based. Here you will typically stay overnight in temporary tented accommodation (fly camps) which is taken down each morning, and then driven, together with your baggage, to your next camping site, and re-erected there, while you yourself get there on foot. However the mobile walking safari concept often suffers from the somewhat basic nature of the accommodation used – small tents, in which standing up can be difficult, bucket showers and long drop loos. It’s a bit too basic for many people, although it is very seriously on offer in Zambia.

The Classic Camp-to-Camp Walking Safari: This truly is the ultimate walking safari experience. Rather than striking camp each day, the walk simply takes place in between two permanent camps – usually bush camps, but exhibiting a much greater degree of comfort than do fly camps. This type of walking safari underpins the principal AfricaAway offerings.