As already mentioned, Kenya, along with most other African safari destinations, prohibits walking safaris in all of its National Parks (together with off-road driving and night drives, all activities that add immeasurably to the safari experience).

This means that, until now, walking in Kenya has had to be restricted to areas that lie outside these government-run National Parks.

So how did we ourselves get around this National Park walking safari restriction?

The solution lies in the fact that, comparatively recently, a number of Conservancies have been established, quite independent of the National Park system. Often these Conservancies represent land previously used by, for example, the local Maasai tribespeople, but now leased to camp operators, to their mutual benefit. Often these Conservancies are actually attached to National Parks – as in the Maasai Mara – or may instead be totally free-standing. However the big difference, from our point of view, is that there are no irksome government restrictions placed on these areas – and therefore walking safaris (together with night drives etc) can freely take place here.

Most important of all is that the number of camps that can be located in each Conservancy (and indeed the number that are actually allowed to game drive or walk here) is strictly controlled – perhaps to less than half a dozen. This means that the dreadful ‘traffic jam’ of game viewing vehicles that is regularly experienced in the most popular Parks, the Maasai Mara being a classic case in point, can be completely avoided. You might well ask whether the amount of game to be seen is as good. The answer is that it is usually at least as good. There are no natural boundaries between the National Parks and their surrounding Conservancies, and the game often appears to be relieved to be able to get away from the crowds of tourists! Even where the Conservancies stand on their own, they have successfully been populated with an abundance of game. 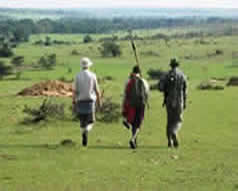 Fairly obviously, what we attempted was to take advantage of the ability to take to one’s feet in the Conservancy areas, as opposed to the National Parks. We are not going to pretend that nobody else had thought of doing this: most of the camps located here do already offer the opportunity to walk. But these walks are typically of the ‘Bimble in the Bush’ variety, rather than the classic ‘Camp to Camp’ trek, involving a serious distance walk. If you think about it, the reason for this is fairly obvious. If camps were to offer the opportunity to transfer on foot to another location then they will have lost their guest. We never believed that it was a case of the camps refusing to enter into this sort of activity, but rather that they never even considered the possibility, for the above reason (in Zambia it is somewhat different, since there are several companies who operate a string of camps in the one Park, enabling a walking circuit to be established, within their own regime).

What we felt to be our own contribution – stemming from our ability to take an independent overview of the situation – is that of coming up with the idea of setting up a circuit of walking destinations within a single Conservancy – or sometimes bridging two neighbouring Conservancies – using the, restricted, series of camps resident here. To date we have, to a restricted extent, been able to establish this Classic Walking Safari concept in four distinct Kenyan locations: in two Conservancies bordering onto the Maasai Mara, and in two separate, and different stand- alone Conservancies in the unspoilt Laikipia area of Kenya: namely Ol Pejeta and Lewa.

Ideally we tried to set up a circuit of 3-4 camps in a given region, between which the guests could transfer on foot, their baggage being taken along separately by vehicle. The idea was to spend a minimum of two nights at each camp, combining walking, game viewing by vehicle, night drives, or simply just relaxing in camp: whatever the guest would like to do. Around three nights would be spent at the first such camp, principally taking game drives in the area (since most people, however dedicated to walking, will want to ensure some good traditional game viewing as well). Following on from this the guests would transfer on foot to the second camp, typically some 10-20 km away. If the straight-line distance was less than they were looking forward to doing, then of course a non-direct route could be followed; if too far, then they could be driven a short distance out along the route, before taking to their feet. 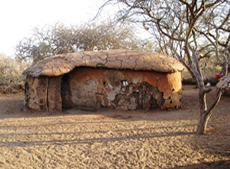 arrival, in late morning, before it gets too hot, they would typically take a welcome shower, before lunch. The afternoon could then be spent relaxing, until it became cooler, around 4.00 p.m., at which point a further short walk, out and back to camp, followed by a well-deserved sundowner or two, could be undertaken, or a game drive and night drive, punctuated by a similar, and pre-arranged, sundowner. The following day would be spent in the same location, either relaxing in camp – several have their own swimming pool – taking a further out and back walk in the vicinity of the camp, or going out on a game drive. In the case of camps located close to the Maasai Mara, it is possible to arrange for a whole day game drive into the Park, especially popular if the wildebeest migration is taking place. A visit to a Maasai village is also an experience that will not soon be forgotten.

Different grades of walk can be arranged in each case to suit whatever degree of exertion is desired by each guest. The above procedure is repeated until the full circuit has been completed, and each different kind of habitat within the Conservancy area visited, before travelling on to your next destination the following day. See 'Our Own Walks' for examples of these.

Why It Didn't Really Work

Despite putting a lot of effort into this new concept, regrettably it never really worked all that well. This is mainly because, although most of the camps that we tried to involve in all of this, were very willing to cooperate, the whole ambiance of Kenya just isn’t geared to serious walking. In many respects it is a safety issue. Unlike in Zambia, the guide quality just isn’t geared to serious walking. In particular the guides are mainly armed with AK47s, which might be excellent for gunning down other human beings, but which would not be very effective against, say, a rogue elephant. What is required is a high calibre rifle. Hence we have reluctantly had to drop the idea of day-by-day serious camp to camp walking. It is still possible, but only for groups of 6-8 people, with the addition of an experienced walking guide from outside Kenya, which makes it all prohibitively expensive.

However if you are holidaying in Kenya, and especially undertaking a conventional safari experience (i.e. game watching by vehicle), and would like to experience some restricted, say half-day, walking, in the vicinity of your camp, then we can indeed organise this for you. But if it is serious camp to camp walking that you are after, then – very simply – Zambia is your target country. However, as seen in the ‘Our Itineraries’ section, there are just a couple of serious walking enterprises that we are quite happy to recommend to you.